Hickman County history is as unique as any other place you could imagine.

Founded in 1821, Hickman County was the seventy-first county in Kentucky in order of formation. It was named for Captain Paschal Hickman of the 1st Rifle Regiment, Kentucky Militia. A resident of Franklin County, Kentucky, Hickman was wounded and captured at the Battle of Frenchtown in January 1813 and was killed by Indians in the Massacre of the River Raisin.

Columbus, Kentucky, in the northwest of the county and located on the Mississippi River, was the original county seat. A log structure built in 1823 served as the courthouse. In 1830, the county seat was moved to the more centrally located Clinton.

In 1861, early in the American Civil War, the Confederate Army established Fort de Russey on the strategically located bluffs at Columbus across the river from Belmont, Missouri. Confederate General Leonidas Polk knew it was important to control the river, and wanted to extend a massive chain across the Mississippi to block Union forces from going downstream. (This was never achieved.) The fort was garrisoned with several thousand troops and a six-gun battery was installed; a smaller force was based at a Confederate camp in Belmont.

Union Gen. Ulysses S. Grant moved troops from his base at Cairo, Illinois, and attacked Belmont in November 1861, his first battle of the war. He was ultimately defeated by Confederate troops sent from Columbus across the river to reinforce the Confederate defense; they were led by Polk.  The former site of the Confederate fortifications near Columbus, Kentucky is now the Columbus-Belmont State Park, commemorating all the actions of the day that led to Union defeat here.  Hickman County KY is designated as part of the Kentucky Civil War Heritage Trail.

Columbus-Belmont State Park is also designated as a part of the historic Trail of Tears.  Named for John Benge who led a detachment of approximately 1,100 Cherokee with 60 wagons and 600 horses on a route to Oklahoma by way of Tennessee through Hickman County, Kentucky and into Missouri and Arkansas. The group arrived in Columbus, Kentucky in mid-November 1838, and awaited transport across the Mississippi river by ferry to Belmont, Missouri.

The Cherokee most likely spent several days camped around the ferry landing in the area of Columbus-Belmont State Park. The Benge Detachment is the only detachment out of the 13 that went overland that came through Hickman County, Kentucky. The Benge detachment was 10 days in crossing the Mississippi River at Columbus “Iron Banks”. 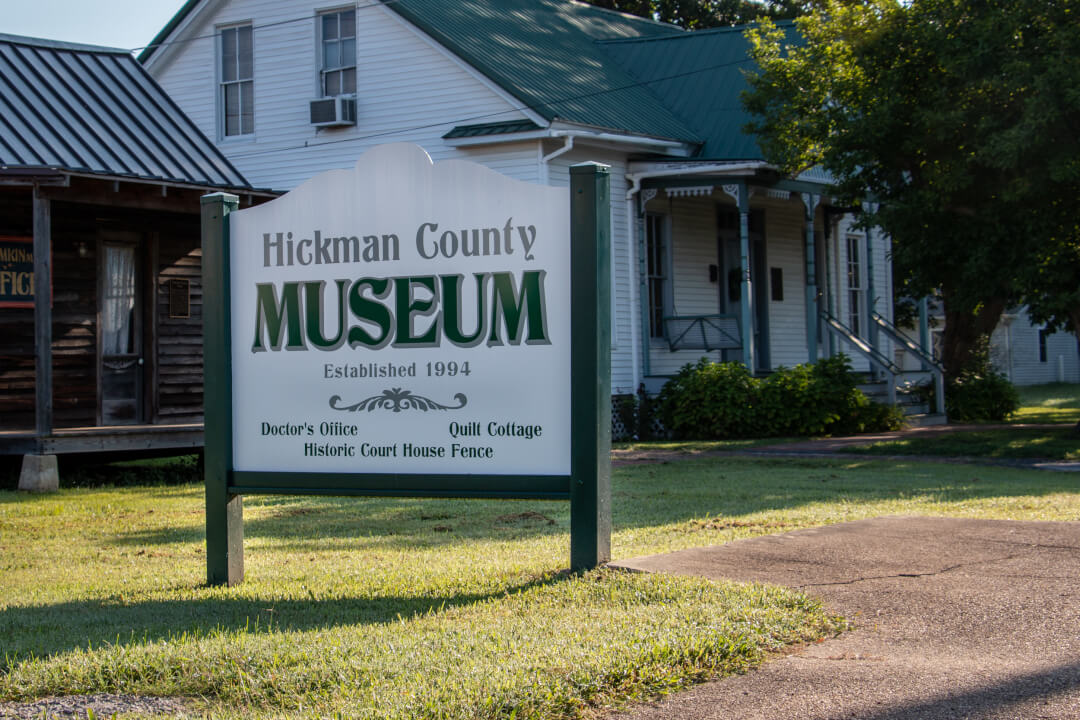 Located in Clinton, KY, the Hickman County Museum is rich in history.  In 1821 the Kentucky legislature organized Hickman County. Clinton became the county seat in 1829. Museum is full and rich in history. More than 3000 items on display in the 1860’s era home.  The Hickman County Museum was founded in 1994 by a group of dedicated volunteers and wonderfully supportive community. If the walls of this 1860s era home could talk…. and in a way, they can. Through careful preservation and captivating exhibits we have managed to capture the amazing history, stories, and memories of Hickman County.  The Museum take artifacts that are solely from Hickman County, allowing the Museum to stay true to the history of the county, to preserve local memorabilia, and still give a fascinating picture of changing times.